Here is something quite different from my usual posts.

Almost a year ago, in early January of 2017, I sent an email with a picture to a casting agency (Sande Alessi) to appear as an extra in a movie which was then tentatively called “Horse Soldiers”.

If you haven’t heard of the book (Horse Soldiers), or the movie, which is now called 12 Strong, here is a short description from their website:

“12 Strong” is set in the harrowing days following 9/11 when a U.S. Special Forces team, led by their new Captain, Mitch Nelson (Hemsworth), is chosen to be the first U.S. troops sent into Afghanistan for an extremely dangerous mission. There, in the rugged mountains, they must convince Northern Alliance General Dostum (Navid Negahban) to join forces with them to fight their common adversary: the Taliban and their Al Qaeda allies. In addition to overcoming mutual distrust and a vast cultural divide, the Americans—accustomed to state-of-the-art warfare—must adopt the rudimentary tactics of the Afghan horse soldiers. But despite their uneasy bond, the new allies face overwhelming odds: outnumbered and outgunned by a ruthless enemy that does not take prisoners.

The largest, most epic battle scene for the movie was filmed at White Sands, NM. NM is sort of a film haven, with their tax incentives, awesome desert backdrops, open space, and qualified people in the film industry it’s no surprise.

Here is how it went:

After I was accepted as an extra, I got to be a  bad guy. The job itself (which was a paid gig) was not that difficult, but ti did require up to 16 hours per day, and for me to drive one hour to Alamogordo just so we could get picked up at 5 or 6 am by a bus and take an additional one hour ride to the location. It was an incredibly fun experience though, but perhaps because I did this for just two weeks and only every other day. I can see how this could get repetitive and boring.

After arriving every day you had between 30 minutes to 1 hour to have breakfast in a very well stocked kitchen tent. This was January and White Sands, so hot coffee was a must.

After breakfast, you would sign in, or basically check in. If it was the first day, you would get measured and receive a brand new costume in the wardrobe tent. For us that meant boots, camo or wool loose pants (which we actually wore over our jeans, it was pretty darn cold), and a wool long coat.

Then you would go to makeup. Depending on the stage of the battle that was being filmed that day, and how close you were positioned to the action, you would get dirt, bruises, blood, or be potentially completely “blown up” or “burned”. Makeup also consisted of getting fake dirt between your fingernails, which by mid morning became real dirt.

Then, you had to go through “ageing”. This meant getting your costume torn, burned, and dirtied. Most of the stuff they used for this was some sort of makeup as well. This also meant that after being “aged” you smelled like cherries and face wipes, which I found hilarious when surrounded by huge dudes with badly torn clothes and covered in “dirt” and “filth”. We were the nicest smelling army there ever was, at least at the start of the day.

Then, you would have to pick up your weapon. If you were close to camera you would get replicas, if you were further away, running, or in between a lot of action you would get rubber weapons. You could also get a rocket launcher, but that meant standing very far up the mountains, which after the first day people didn’t really like. Also, people initially loved the replicas, because that meant you would probably be featured in at least a backdrop, but carrying the heavy weapons for hours on end made them a lot less popular after the first day as well.

You could also get accessories like a belt with rubber ammo clips or grenades. In fact, in a scene where we are all captured and kneeling, we used the ammo clips on as cushions for our knees.

Some days we were meant to be dead, so we would just lie in the ground around the scene. It happened often, where we would fall asleep and someone would start snoring loudly. Then the crew would give us a slight kick or shake to wake us up.

Other days, additional gore was needed, which was provided in the form of strawberry syrup and if Nicolai (the director) needed more “brains”, a mushed banana was promptly placed right next to us. Bees loved this, even in January…

At one point, we just had to walk up and down a hill all day. I had a particularly interesting day when I had to be lying dead at the rim of a crater right next to Chris Hemsworth for hours, and hours, and hours. It was exiting the first few times, but after a while I got sleepy, like everyone else. You could see however the challenge of putting up a great act between scenes, while a ton of people were watching you, with half a dozen cameras on your face. He said hi, we bumped fists, but other than that, to each his own, he was working and so were we, and people were more respectful than you would imagine (of course we were “strongly advised” to be distant and mindful of that too). I saw Michael Shannon while we were there too.

The best days though were when the tanks were moving, all the extras were deployed, we had to run between real explosions, fires that the VFX crew set up across the field, with horses running towards us, and there was yelling, jumping, rolling, shooting, hiding, and fire all around you. It was like playing make believe. I got personally shot by Chris a few times. Of course, I am not saying that war or a real life scene like this are enjoyable in any way. Quite the opposite. Because this was not real, it was amazing to see and experience, sort of like a theme park ride, where you see it from the safety of your position and role-play. I am sure that the final cut will show something very tragic and with quite some gore. This also puts things into perspective, and makes it a lot more unimaginable that things like this actually happen in real life. For me it was like being between front row and backstage at a very elaborate theater production. 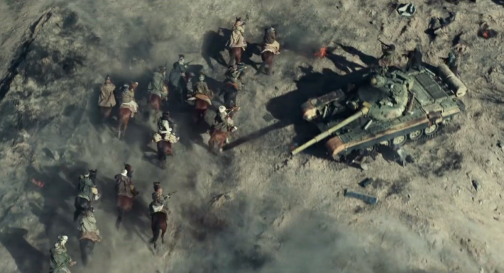 I am somewhere on all these scenes from the trailer, not on a horse, and probably completely indistinguishable, but if someone finds me let me know!

I realize that some of my friends work on VFX, SFX, audio, on set, or at various stages of production, but for most of use, these places are out of reach and we find it fascinating. I have always been amazed at how film has evolved and how technology helps create some outstanding productions. So for those few of us who find this wonderful and mostly out of reach, I hope you found my “behind the scene” post at least a bit entertaining.